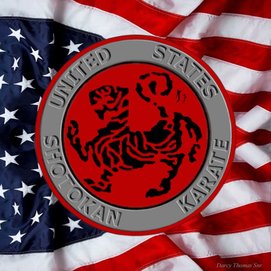 WELCOME TO THE USMAF NATIONAL PROGRAM

Shotokan (松濤館, Shōtōkan?) is a style of karate, developed from various martial arts by Gichin Funakoshi (1868–1957) and his son Gigo (Yoshitaka) Funakoshi (1906–1945). Gichin was born in Okinawa[1] and is widely credited with popularizing "karate do" through a series of public demonstrations, and by promoting the development of university karate clubs, including those at Keio, Waseda, Hitotsubashi (Shodai), Takushoku, Chuo, Gakushuin, and Hosei. Funakoshi had many students at the university clubs and outside dojos, who continued to teach karate after his death in 1957. However, internal disagreements (in particular the notion that competition is contrary to the essence of karate) led to the creation of different organisations—including an initial split between the Japan Karate Association (headed by Masatoshi Nakayama) and the Shotokai (headed by Motonobu Hironishi and Shigeru Egami), followed by many others—so that today there is no single "Shotokan school", although they all bear Funakoshi's influence.  As the most widely practiced style, Shotokan is considered a traditional and influential form of karate do.

Calligraphy of Shotokan Shotokan was the name of the first official dojo built by Gichin Funakoshi, in 1936 at Mejiro, and destroyed in 1945 as a result of an allied bombing.

Shoto (松濤, Shōtō?), meaning "pine-waves" (the movement of pine needles when the wind blows through them), was Funakoshi's pen-name, which he used in his poetic and philosophical writings and messages to his students. The Japanese kan (館, kan?) means "house" or "hall". In honour of their sensei, Funakoshi's students created a sign reading shōtō-kan, which they placed above the entrance of the hall where Funakoshi taught. Gichin Funakoshi never gave his system a name, just calling it karate.

Shotokan training is usually divided into three parts: kihon (basics), kata (forms or patterns of moves), and kumite (sparring). Techniques in kihon and kata are characterised by deep, long stances that provide stability, enable powerful movements, and strengthen the legs. Shotokan is regarded as a dynamic martial art as it develops anaerobic, powerful techniques as well as developing speed. Initially strength and power are demonstrated instead of slower, more flowing motions. Those who progress to brown and black belt level develop a much more fluid style that incorporates grappling, throwing and some aikido-like techniques, which can be found even in basic kata. Kumite (fighting) techniques are practised in the kihon and kata and developed from basic to advanced levels with an opponent.

Philosophy -
Gichin Funakoshi laid out the Twenty Precepts of Karate, (or Niju kun)which form the foundations of the art, before some of his students established the JKA. Within these twenty principles, based heavily on Bushido and Zen, lies the philosophy of Shotokan. The principles allude to notions of humility, respect, compassion, patience, and both an inward and outward calmness. It was Funakoshi's belief that through karate practice and observation of these 20 principles, the karateka would improve their person.

The Dojo kun lists five philosophical rules for training in the dojo; seek perfection of character, be faithful, endeavor to excel, respect others, refrain from violent behaviour. These rules are called the Five Maxims of Karate. The Dojo kun is usually posted on a wall in the dojo, and some shotokan clubs recite the Dojo kun at the beginning and/or end of each class to provide motivation and a context for further training.  Funakoshi also wrote: "The ultimate aim of Karate lies not in victory or defeat, but in the perfection of the character of the participant".

Common terms[edit]Main article: List of karate termsMany terms used in karate stem from Japanese culture. While many are names (e.g. Heian, Gankaku), others are exclusive to martial arts (e.g. kata, kumite). Many terms are seldom used in daily life, such as zenkutsu dachi, while others appear routinely, such as rei. The Japanese form is often retained in schools outside Japan to preserve the Okinawan culture and Funakoshi's philosophies.

However, many schools of JKA (Japan Karate Association) affiliated Shotokan Karate used the full terminology on a daily basis, providing translations also. For example, the KUI (Karate Union of Ireland), utilises the full and proper Japanese name for each move and kata in training, grading and competition.

Rank is used in karate to indicate experience, expertise, and to a lesser degree, seniority. As with many martial arts, Shotokan uses a system of coloured belts to indicate rank. Most Shotokan schools use the kyū / dan system but have added other belt colours. The order of colours varies widely from school to school, but kyu belts are denoted with colours that in some schools become darker as a student approaches shodan. Dan level belts are invariably black, with some schools using stripes to denote various ranks of black belt. Master Gichin Funakoshi himself never awarded a rank higher than Godan (5th dan black belt).

Kihon basics is the practice of basic techniques in Shotokan Karate. Kihon Kata, or Taikyoku Shodan, was developed by Yoshitaka Funakoshi, the son of Gichin Funakoshi, as a basic introduction to karate kata. (Yoshitaka also developed Taikyoku Nidan and Sandan) The kata consists of successive restatements of the theme of gedan barai - oi tsuki.
Kata

Embusen of Heian Shodan (from Best Embusen: Shotokan)Kata is often described as a set sequence of karate moves organised into a pre-arranged fight against imaginary opponents. The kata consists of kicks, punches, sweeps, strikes and blocks. Body movement in various kata includes stepping, twisting, turning, dropping to the ground, and jumping. In Shotokan, kata is a performance or a demonstration, with every technique potentially a killing blow (ikken hisatsu)—while paying particular attention to form and timing (rhythm). As the karateka grows older, more emphasis is placed on the health benefits of practicing kata, promoting fitness while keeping the body soft, supple, and agile.

Kumite, or sparring (lit. Meeting of hands), is the practical application of kihon and kata to real opponents. The formalities of kumite in Shotokan karate were first instituted by Masatoshi Nakayama wherein basic, intermediate, and advanced sparring techniques and rules were formalized.  Shotokan practitioners first learn how to apply the techniques taught in kata to hypothetical opponents by way of kata bunkai. Kata bunkai then matures into controlled Kumite.  Kumite is the third part of the Shotokan triumvirate of kihon, kata and kumite. Kumite is taught in ever increasing complexity from beginner through low grade blackbelt (1st - 2nd) to intermediate (3rd - 4th) and advanced (5th onwards) level practitioners.  Beginners first learn kumite through basic drills, of one, three or five attacks to the head (jodan) or body (chudan) with the defender stepping backwards whilst blocking and only countering on the last defence. These drills use basic (kihon) techniques and develop a sense of timing and distance in defence against a known attack.  At around purple belt level karateka learn one-step sparring (ippon kumite). Though there is only one step involved, rather than three or five, this exercise is more advanced because it involves a greater variety of attacks and blocks usually the defenders own choice. It also requires the defender to execute a counter-attack faster than in the earlier types of sparring. Counter-attacks may be almost anything, including strikes, grapples, and take-down maneuvers.

Some schools prescribe the defences, most notably the Kase-ha Shotokan-ryū, which uses an eight step, three directional blocking and attacking pattern, which develops from yellow belt level through to advanced level.

Free sparring (or free style) (jiyu kumite) is the last element of sparring learned. In this exercise, two training partners are free to use any karate technique or combination of attacks, and the defender at any given moment is free to avoid, block, counter, or attack with any karate technique. Training partners are encouraged to make controlled and focused contact with their opponent, but to withdraw their attack as soon as surface contact has been made. This allows attacking a full range of target areas (including punches and kicks to the face, head, throat, and body) with no padding or protective gloves, but maintains a degree of safety for the participants. Throwing one's partner and performing takedowns are permitted in free sparring, but it is unusual for competition matches to involve extended grappling or ground-wrestling, as Shotokan karateka are encouraged to end an encounter with a single attack (ippon), avoiding extended periods of conflict, or unnecessary contact in situations where there may be more than one attacker.

Kaishu ippon kumite is an additional sparring exercise that is usually introduced for higher grades. This starts in a similar manner to freestyle one-step sparring; the attacker names the attack he/she will execute, attacks with that technique, and the defender blocks and counters the attack. Unlike freestyle one-step sparring, however, the attacker may then be required to block the defender's counter-attack and strike back. This exercise is often considered more difficult than either freestyle one-step sparring or free sparring, as the defender typically cannot escape to a safe distance in time to avoid the counter to the counter-attack.
Kumite within the dojo often differs from competition kumite. In dojo kumite any and all techniques, within reason, are valid; punches, knife hand strikes, headbutt, locks, takedowns, kicks, etc. In competition certain regulations apply, certain techniques are valid, and certain target areas, such as the joints or throat, are forbidden. The purpose of competition is to score points through the application of kumite principles while creating an exciting and competitive atmosphere, whereas the purpose of training kumite in the dojo is to be prepared to kill or cripple an opponent in a realistic situation.

History -
Shōtōkan-ryū founder Gichin FunakoshiGichin Funakoshi had trained in both of the popular styles of Okinawan karate of the time: Shōrei-ryū and Shōrin-ryū. After years of study in both styles, Funakoshi created a simpler system that combined the ideals of the two. He never named this system, however, always referring to it simply as "karate." Funakoshi's karate reflects the changes made in the art by Ankō Itosu, including the Heian/Pinan kata series. Funakoshi changed the names of some of the kata in an effort to make the Okinawan kata names easier to pronounce in the Japanese Honshū dialect.  In 1924, Funakoshi adopted the Kyū / Dan rank system and the uniform (keikogi) developed by Kano Jigoro, the founder of judo. This system uses colored belts (obi) to indicate rank. Originally, karate had only three belt colors: white, brown, and black (with ranks within each).

The original belt system, still used by many Shotokan schools, is: